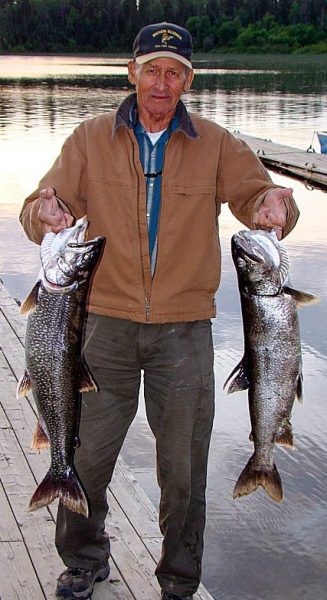 Passed away peacefully after a short battle with cancer at the Lady Dunn Health Centre, Wawa on Friday, August 24, 2018, at the age of 81 years. He was born on September 21, 1936 in Missanabie where he remained a life long resident. It was there he met his loving wife of 47 years, Alice, who stayed by his side all those years and was there to comfort him at the time of his passing.

Wilfred was an avid outdoors-man who grew up a hunter, trapper and fishing guide. After leaving the Canadian Pacific Railway in 1985, he chose to turn his love for the outdoors into a living. He purchased three small cabins on Dog Lake and built up a business that he worked hard at right up to his last days. His business provided a chance to meet people from all over Canada and the United States. Many good friendships resulted from those first meetings at the dock and they will surely miss all the good times together and his trademark sense of humour.

Wilfred was a loving son to the late William and Margaret (nee Isherhoff) Sheshequin. Brother to Sheila Caron (Claude), the late Mary Charette (late Roland) and the late Earl Quinn (late Catherine). Dear loving father of Charles (Cheryl) and the late Charlene. Special uncle to Charlotte (Travis), Judy (Mike) and proud great uncle to Arianna. He will be fondly remembered by his many nieces and nephews as well as countless friends.

The family would like to thank Doctors Cotterill and Woolner and a special thanks to the nursing staff of the Lady Dunn Health Centre, Wawa.

At Wilfred’s request, no service will be held and interment of his ashes will be at the Slumberland Cemetery in Missanabie.

In lieu of flowers, memorial donations made to the Lady Dunn Health Centre, Wawa would be greatly appreciated by the family.

Latest posts by Family (see all)