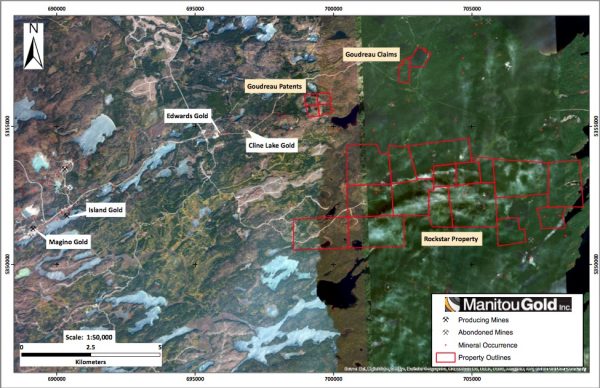 Manitou Gold Inc. is pleased to announce receipt of final reports on the magnetic, induced polarization and soil gas hydrocarbon surveys completed on its 100% owned “Goudreau Patents.”  The Goudreau Patents property consists of four surface and mining rights patents, covering an area of approximately 160 acres and is located less than 2kms east of the past producing Edwards and Cline mine properties, within the Goudreau-Lochalsh Deformation Zone (the “GLDZ”).  The GLDZ is an approximately east-west oriented zone of deformation accompanied by quartz veining, alteration and associated gold mineralization. There are numerous active and past producing mines hosted within the “GLDZ, the most prominent being the Island Gold Mine operated by Alamos Gold.

Results of the winter surveys are summarized as follows: 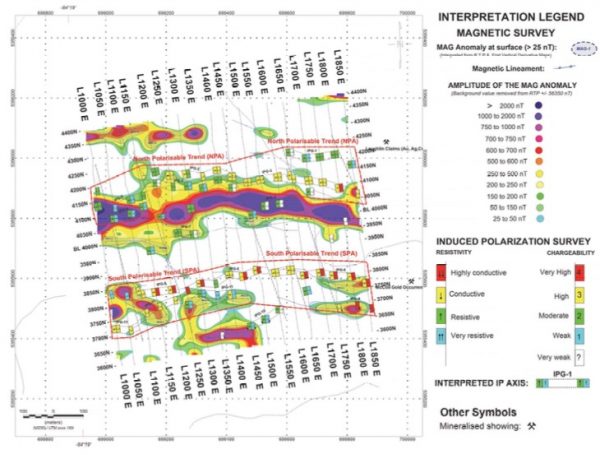 Magnetic Survey – The MAG survey outlined a feature crossing the property that is interpreted to indicate a gabbro sill observed on adjacent lands.  Several structural features are apparent in the magnetic images as well.

IP Survey – The IP survey identified two discreet chargeability trends across the property.  Both of these trends align with known gold occurrences on adjacent lands. 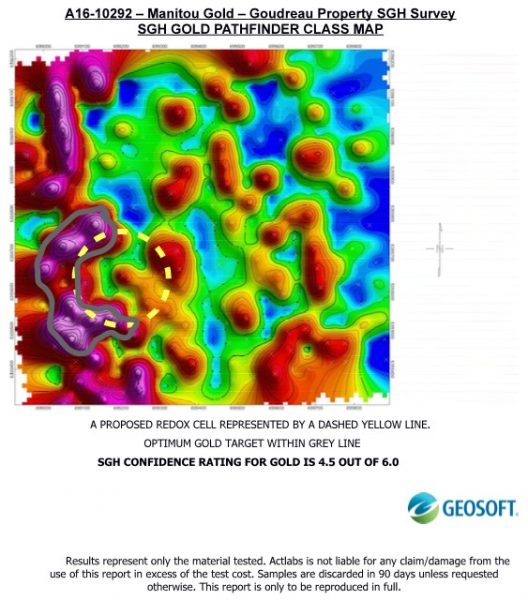 SGH Survey – The SGH survey identified several areas displaying the representative signatures of gold mineralization.  One particular circular cluster of anomalies centered in the southwest quadrant of the property was recommended as a very high priority target.  This area of strong gold-affiliated responses is coincident with discreet IP chargeability features.  This area will be given first priority in the upcoming prospecting efforts.

The Goudreau area has a long history of exploration and mine development.  In recent years, the area has begun to rise in prominence due to renewed gold exploration and development activity.  At the west end of the GLDZ, Argonaut Gold recently completed a feasibility study on its Magino Gold property.  Just east of Magino is the extensive Island Gold Mine property, which was acquired by Alamos Gold Inc. last November through its takeover of Richmont Mines.  Immediately to the east of the Alamos property are the past producing Edwards and Cline Mines respectively.  Manitou Gold’s Goudreau Patents property is located just to the east of the Edwards and Cline Mines and covers the same GLDZ and host rocks as the neighboring mines (see Company press release dated Oct 30, 2017).  The Rockstar Property is located south and east of Manitou’s Goudreau patented property and covers another section of the GLDZ.

Maps of the IP, MAG and SGH results can be found on Manitou Gold’s website.

“The results of the winter technical program on the Goudreau Patents provide us with some very attractive targets”, stated Richard Murphy, CEO of Manitou Gold.  “I am very excited to get on the ground and start prospecting the areas highlighted by the winter technical surveys and their apparent correlations which point to promising outcomes.”

Manitou Gold has engaged with local First Nations to begin the consultation process.  The Company looks forward to continuing to build strong relationships with our First Nation partners.