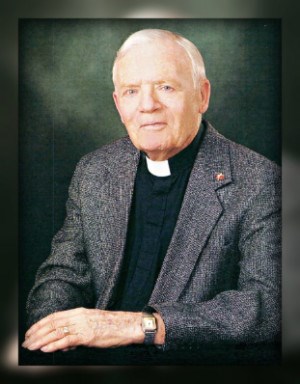 At the F.J. Davey Home on Saturday, April 20, 2019, Rev. Gerald Yadivisiak passed away peacefully surrounded by family. Although he fought bravely against Parkinson’s, which slowly took over his body, his wit and brilliant mind remained until the end.

Fr. Gerald dedicated his life to serving both God and his country. He was ordained a priest on June 1, 1961 at Our Lady of Good Counsel Church in Sault Ste. Marie. He travelled the world as a chaplain with the Royal Canadian Navy, retiring after 14 years with the rank of Lt. Commander/Major. Upon his return to civilian life, he served as pastor in parishes throughout the Diocese of Sault Ste. Marie. Following his retirement in 1989 from St. Joseph the Worker parish, he lived with his sister, Lucy, enjoying their close relationship as they looked out for one another.

Uncle Gerald’s deep spirituality, vast global knowledge and quick wit made him a welcome addition to any formal or informal gathering with his family and community. He will be sadly missed by his family and friends (especially Michael Solomon), as well as the parishioners he so loyally served for so many years.
We, as his family, thank the staff of Birch Lane 2 for their compassionate care and understanding for our beloved uncle.

Friends and family may call at St. Jerome’s Roman Catholic Church for visitation on Thursday, April 25, 2019 from 6 pm to 9 pm.  Funeral Mass to be celebrated at St. Jerome’s Roman Catholic Church on Friday, April 26, 2019 at 10 am with Rev. Pat Woods officiating. Interment in the Priest’s Plot at Holy Sepulchre Cemetery.
Memorial contributions (payable by cheque) to the F.J. Davey Home Foundation, Parkinson Foundation Canada, ARCH, Covenant House or a charity of your choice would be appreciated.