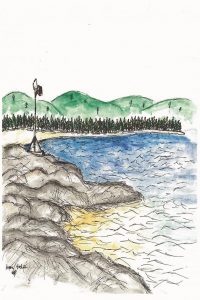 Anna Lachine’s artwork shows the light standard at Michipicoten Bay with Driftwood Beach in the background, the foreground is Rock Island.

In celebration of Canada’s 150th anniversary, the Legislative Assembly of Ontario is creating a series of banners featuring the unique artistic talents of young Ontarians aged 14-25. Artists from across the province were invited to submit their artwork digitally for consideration prior to January 2, 2017. The theme that artists were to acknowledge in their work was: What do you love about Ontario?

Algoma District School Board and Michipicoten High School are very proud to announce that MHS Grade 9 student Anna Lachine was one of the ten young artists whose artwork was selected.

The ten selected works will be printed on vinyl banners that will be prominently displayed on the south grounds of Ontario’s Legislative Building in Toronto. The banners will be on display from mid-January until mid-December 2017. In addition to the banner display at Queen’s Park, Anna’s winning painting will be featured on the Legislative Assembly of Ontario’s website.

Anna’s watercolour and ink drawing depicts a location not far from Anna’s home in Wawa – Driftwood Beach at the mouth of Michipicoten River on the shores of Lake Superior.

About the artist – Growing up, Anna spent a lot of her time swimming, canoeing, and hiking near or on Lake Superior. Her artwork is a representation of where the Michipicoten River empties into Lake Superior just outside of her hometown. Anna used the water from the lake itself for her watercolour, to truly capture Lake Superior in the painting. A self-taught artist, she has always been inspired by the world around her. Anna grew up in a family that loves music and art, and has a deep appreciation of the outdoors which has nurtured her love of creating art that captures the beauty of nature as well as reflections of the world and herself. 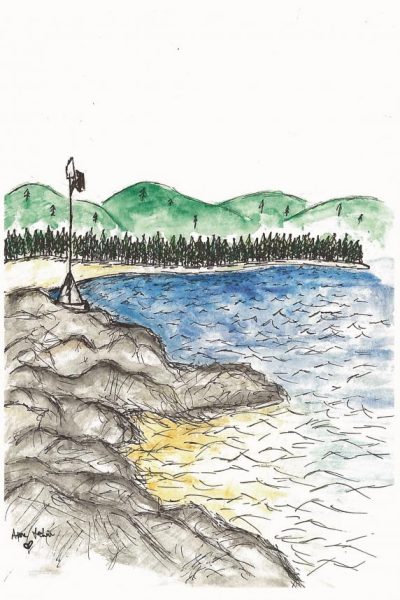 Anna Lachine’s artwork shows the light standard at Michipicoten Bay with Driftwood Beach in the background. 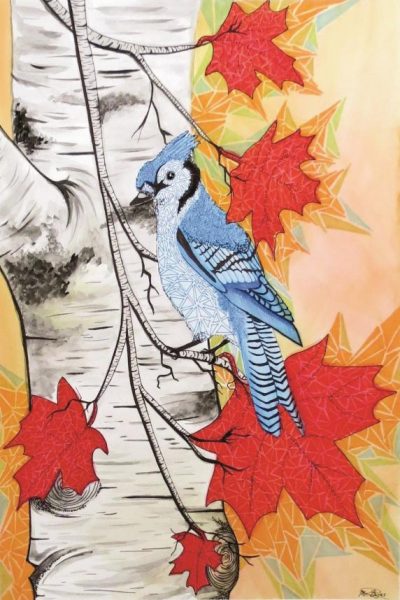 Majestic Ontario by Monica Bujas, 22 of Mississauga-Brampton South. This piece reflects the beautiful wonders of nature that are found throughout the province’s urban and rural environments. The unique symbols of birch trees, maple leaves, and Blue Jay birds reflect what Monica loves. This drawing uses a quilt-like approach of intricate patterns to stitch three aspects from Ontario’s majestic natural environment into a semblance of order. The maple leaves symbolize pride to be Canadian, the changing colours connotes the multicultural and diverse society that we live in, while the Blue Jay represents the beautiful wildlife found within the province and is an icon for Toronto’s professional baseball team. 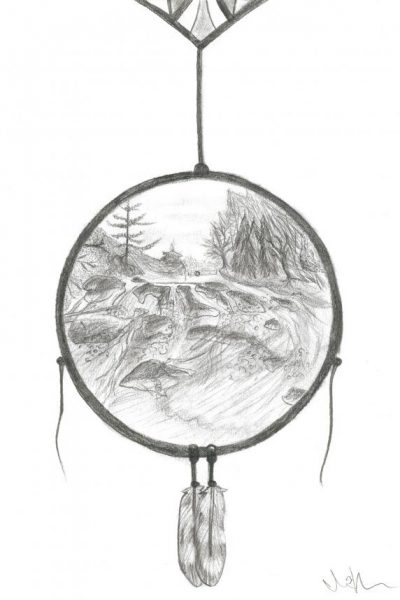 Catching Ontario Dreams by Madeline Debnam, 15 of Halliburton-Kawartha Lakes – Brock. Madeline’s work is a pencil sketch of a cottage country landscape with an Aboriginal flare to reflect the rich Native heritage and culture in Ontario. These are both things she loves about Ontario. 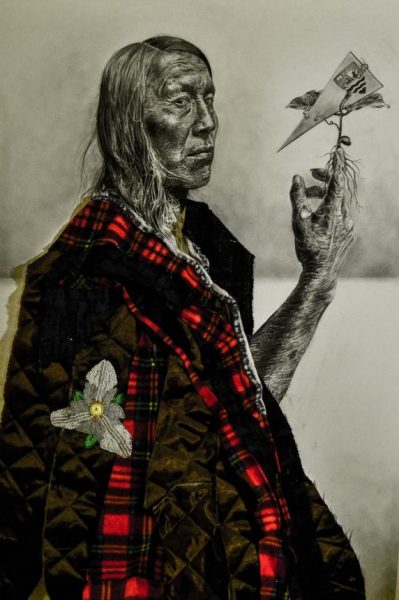 Recognizing Worldviews Through Education is a callaboration between Mary McPherson, 20 and Blake Evans, 22 of Thunder Bay-Atikokan. This collaborative work is a critical reflection upon the theme “What do you love about Ontario?” The piece emphasizes gratitude for post-secondary education as a means of expanding one’s personal knowledge. For Mary, the post-secondary experience teaches critical thinking skills and the tools for her to rediscover the philosophies of her worldview. For Blake, post-secondary education offers a means of collaboration and learning from different perspectives; with a focus on learning about settler history as well as contemporary colonialism. This artwork synthesizes two worldviews present in Ontario; the Indigenous and the settler – depicted by showing an appreciation for educational opportunities that are available to us. 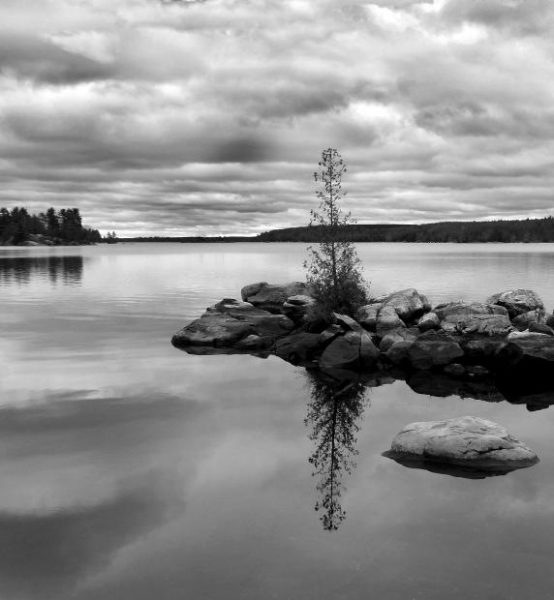 This untitled photograph is by Layla Madison McNaughton, 21 of Oshawa. This beautiful landscape photograph was taken at the Gallery on the Lake in Buckhorn, Ontario. It is a peaceful scene of Buckhorn Lake, taken at the end of fall. The still water and reflections are what initially caught Layla’s eye. 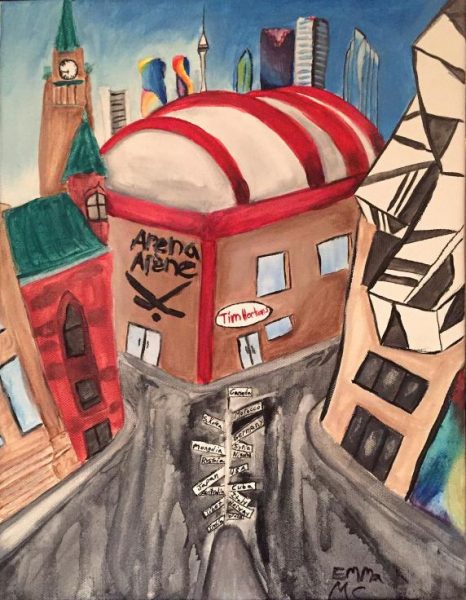 Ontario Discovered By Emma McConnell,14 of Essex. Emma’s painting was inspired by the increasing diversity of Ontario. Buildings such as the First Canadian Place, the Parliament Buildings, the CN Tower and the Royal Ontario Museum represent everything Ontario has to share with people from around the world, from sport, art, social, commerce, government and education. The sign in the middle of the street has two or more countries from every continent, to show that everyone is welcome whether they are from Japan, Nigeria, Syria, Norway or any place in between – we will all share and create new things together. 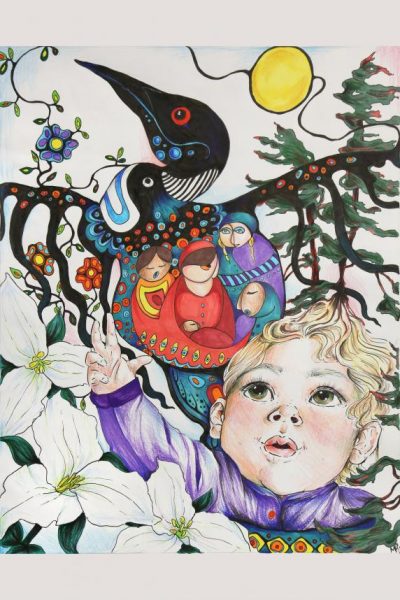 Speaker’s Choice Award – Family by Madalina Raduta, 16 of York Centre. This piece focuses on the sense of family within Ontario, with all people included and treated equally. Madalina’s artwork reflects a small child looking up at a drawing, on the back of a loon, of a group of people embracing. She has incorporated the different symbols of Ontario, like the Common Loon, the Eastern White Pine, and the White Trillium. Madalina was also inspired by the Indigenous artists Daphne Odjig and Norval Morrisseau in the way she drew the loon and the people embracing.

Diverse Experiences by Alicia Hrvatin, 16 of Bramalea-Gore-Malton. Alicia’s artwork is a reflection of multicultural diversity and the beautiful wildlife and nature. Alicia says these are the things that are great about Ontario.

This photograph is by Liam Karmen, 17 of Richmond Hill. The message Liam would like to convey in his artwork is that Ontario is unlike any other place in the world. Here in Ontario, we are free to make our own paths, both as individuals and together as a province. This message is shown by a person walking in the fresh snowfall, making a new path. Snow is meaningful in my photo because Ontario is covered in it for half of the year. The colour of the coat was chosen to represent the warmth of our province as a friendly and safe place to live.

The Chase by Irene Li, 16 of Markham-Unionville. This piece showcases Ontario’s vibrant and endless opportunities. The child in the artwork represents the youth in Ontario and the sense of excitement when encountering new adventures. Each opportunity represents a new and daring adventure, whether it be presented to a student, immigrant, elder, parent, or child. Irene deliberately chose to represent this idea with a child because she believes that every individual in Ontario possesses this childlike wonder at the world and that everyone has the chance to pursue their ambitions. 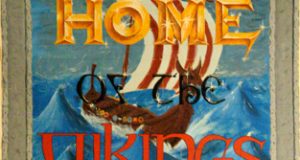 Viking Voices – Back to School