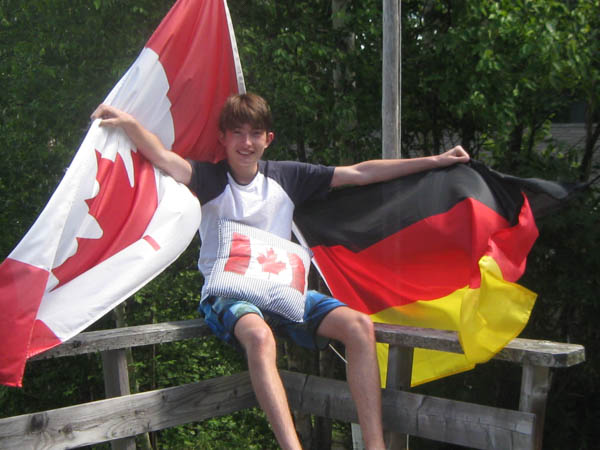 Adam came from Germany last fall as an exchange student for six months. He was billeted in the Barrie area and through school befriended my grandsons Kevan and Darek. They seemed to have the same interests, mainly outdoor activities, and anything motorized. A ski hill was in close proximity and after school and on weekends they love snowboarding, skiing, and when the bay near their home was frozen, skidooing as his favoured activity. The first time he operated a skidoo on clear ice, he was nervous, and thought it was scary, seeing the plants and rocks underneath.

Adam found school in Canada easy – being more advanced in Germany, but in those winter months he became an avid outdoors lover. When he left in March, he had never experienced what Canadian summers had to offer. Texting back and forth with my grandsons, and finally the loaded question, “Can I come back in the summer, if our parents allow it?”. A resounding ‘yes’ was the answer from both sides, and Adam prepared to come back. He packed everything into that short time, a boy of 16 could possibly wish for. There were open air concerts, four-wheeling, dirt biking in a gravel pit, and then there would be a few days up north in Omi’s Camp, which is a yearly highlight for my grandsons, and they wanted to share it with Adam. 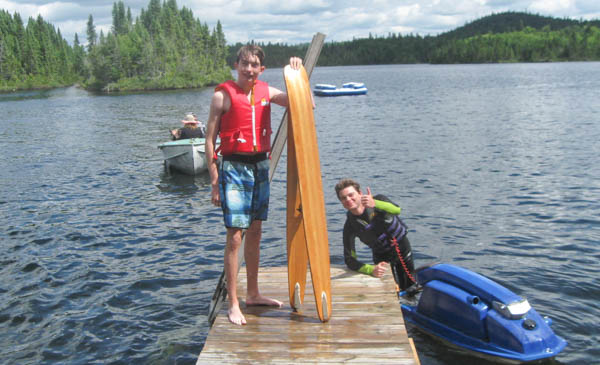 He was not impressed with the nine hour long trip up here, which he endured mostly by sleeping — but once he dipped his toes into the lake with endless swimming, saunaing, waterskiing and sea-dooing, he was thrilled. The boys canoed to a beaver dam, so solid they could walk on it. The beaver had incorporated a white plastic pail into his dam’s construction — how ingenious! The loons displayed their song and dance right in front of the dock , and while they were trying to catch fish, wolves could be heard howling in the distance. 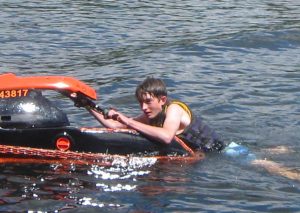 During a hike to an abandoned mine, they startled two sandhill cranes, who took flight with their enormous wings. Adam thought it was awesome to see these big birds so close. Unfortunately or (fortunately) they didn’t see a bear or moose closeup, only their droppings — but I served a moose roast that a friend had given me. It was rated ‘very good’ by Adam. Sleeping in bunk beds, using an outhouse, and no electricity was another experience for a city boy, and it all added up to an adventure most boys only dream about.

Good byes are always sad when the boys leave — and so was this one with Adam. He wrote in my logbook “Had the most Canadian experience of my life here in Wawa. I hope to be back soon, Adam”.

That shows to me, we have so much. Others can only dream of, and we do not respect or value our resources. On the way to the airport, my daughter-in-law, Lara gave Adam a collage of pictures of his visit. They are now displayed proudly at the entrance of his home in Cologne. I would not think of a better ambassador for Wawa.