Red Pine Exploration Inc. has received partial results for holes SD-16-45 to SD-17-49 from its on-going drilling program at the Wawa Gold Project.

Highlights from the drilling results include:

Quentin Yarie, President and Chief Executive Officer of Red Pine states, “It is exciting that our expectations of discovering a high-grade zone in the northern extension of the Surluga Deposit were met with the results of SD-16-45. Extending and defining this shallow high-grade zone, beginning 98 metres below surface will have positive impacts on the Surluga Deposit inferred resource2.

Exploration work in the Darwin-Grace mine area is uncovering exceptional near surface targets in the vicinity of the old mine with visible gold1 observed in four holes and the discovery of two new shear zones with quartz veins containing visible gold. The discoveries made in the area indicate that the structure hosting the mine is larger and more fertile than initially anticipated.” 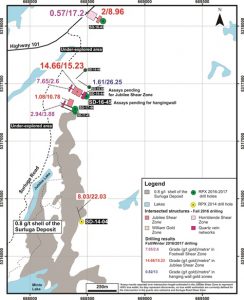 Drilling Results
Holes SD-16-44, SD-16-45 and SD-16-46 were drilled to test the depth extension of mineralization encountered at surface in the Surluga Road Shear Zone (see November 11, 2016 News Release), in an area extending north of the Surluga Deposit previously untested by drilling. The high-grade intersection in SD-16-45 occurs down-dip from the quartz vein networks intercepted in SD-16-44 that ran 1.61 g/t gold over 26.25 metres (Figure 1 to right). Information obtained from SD-16-45 will assist in targeting higher grade intersections north of the current resource.

Furthermore, Hole SD-16-45 intersected a fold closure zone within the Jubilee Shear Zone. Fold closures represent zones of dilation which act to channel ore forming fluids. As a result, they are often associated with zones of maximum grade/thickness in many gold deposits around the world. Another fold closure zone was intersected previously by Red Pine in Hole SD-14-04 that contained 8.03 g/t gold over 23.03 metres (calculated true width).

Drilling further south suggests that the Darwin-Grace mine may be part of a larger deformation zone than previously anticipated. This under-explored area of brittle-ductile deformation is associated with quartz veins containing visible gold1 which extend over 10-20 meters downhole. Red Pine’s recent logging/mapping initiatives reveal a series of stacked mineralized deformation zones up to 15 meters-long hosted within relatively less deformed zones. These zones may not have been identified by previous operators as the telltale L-tectonite fabric they are associated with are challenging to recognize in drill core and at surface. 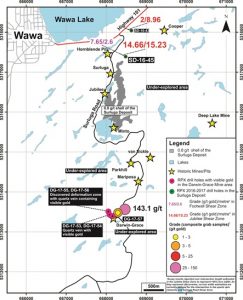 Location of drill holes near the Darwin-Grace Mine in relationship to the Surluga Deposit.

The on-going diamond drill program is focused on expanding the Surluga Deposit, defining the gold structures of the Wawa Gold Corridor and quantifying the structures associated with the historic mines of the property.

On-site Quality Assurance/Quality Control (“QA/QC”) Measures
Drill core samples were transported in security-sealed bags for analyses at Activation Laboratories Ltd. in Timmins, Ontario and to SGS in Cochrane, Ontario. Individual samples are labeled, placed in plastic sample bags and sealed. Groups of samples are then placed into durable rice bags and then shipped. The remaining coarse reject portions of the samples remain in storage if further work or verification is needed.

Qualified Person
Quentin Yarie, P Geo. is the qualified person responsible for preparing, supervising and approving the scientific and technical content of this news release.

2NI 43-101 inferred resource of 1,088,000 ounces of gold at a 1.71 grams per tonne (g/t) using a 0.40 g/t gold cut-off grade for pit-constrained and 2.50 g/t gold cut-off grade for underground-constrained resources, contained in 19.82 million tonnes open along strike and at depth. The Cut-off grades are based on a gold price of US$1,250 per once and a gold recovery of 95 percent (Mineral Resource Statement*, Surluga-Jubilee Gold Deposit, Wawa Gold Project, Ontario, SRK Consulting (Canada) Inc (effective May 26, 2015)). The report is available on www.SEDAR.com under Red Pine’s profile.