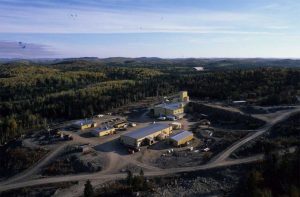 This is a remarkable achievement for area gold companies and miners who have contributed not only to the development of Wawa and the surrounding area, but also to Canada’s growth.

Gold in the Wawa area was first discovered in 1897 on the south shore of Wawa Lake. A minor gold rush followed and the first Mines Geology Office in Ontario was established in Wawa in 1899. Since that time, a long history of gold activity occurred in the Michipicoten area with numerous gold producers. Gold mining in the region continues to have a bright future with both Richmont’s Island Gold mine actively producing and Wesdome Gold Mine’s Eagle River and Mishi sites in operation, both with good proven gold reserves.

The Eagle River property was purchased by Wesdome in 1994 and its first gold bar was poured on October 17, 1995. Wesdome poured its millionth ounce in 2014 and plans in 2016 include increased production at its Mishi Open Pit output in conjunction with further mill upgrades, bringing mill capacity to 1,500 tonnes per day. The Company plans on constructing a new tailings management facility with an operating life of at least ten years to accommodate higher levels of mill output. (Source: Wesdome Press Release, Sept. 14, 2015)

Since 2005, Richmont has been operating about 83km northeast of Wawa near Dubreuilville on its Island Gold Mine property, named fittingly because of its location under an island on Goudreau Lake. Several companies are also performing exploration work in the area including Argonaut Gold Mine (Prodigy) near the former Magino site and Red Pines Exploration in the Surluga area in Wawa. The Surluga area was home to a number of past gold mines including Parkhill, Darwin and Stanley.

Gold will continue to provide a strong economic base for the Wawa area for many years to come and stronger gold prices will hopefully enable the opening of more gold mines in the Wawa area. Congratulations and thank you to all those who played a part in contributing to the production of over 3 million ounces of gold in and around Wawa a remarkable achievement.

EDC of Wawa
The Economic Development Corporation of Wawa is a forward-thinking, collaboration-oriented not for profit that works for the Community of Wawa to achieve it’s economic, environmental and social goals.