The weather forecast is not favourable today, but the search continues.

Yesterday, Trenton JRCC (Joint Rescue Coordination Centre) reported that a Lockheed CP-140 Aurora Long Range Patrol aircraft, equipped with advanced sensors and cameras, was joining the search. From a media release in 2014, it was explained that this aircraft has “new avionics, greater computing power, new acoustics; listening capabilities in the realm of science fiction, and ‘eyes’ that see farther, wider, deeper, and clearer, in all weather conditions, night and day.”.

An Air Task Force has also been established at the Sault Ste. Marie airport. Supporting the search efforts are Royal Canadian Air Force, Canadian Coast Guard, OPP and Civil Air Search and Rescue Association (CASARA). Seven aircraft are assisting in the search along the entire flight plan of missing aircraft between Delhi and Marathon, Ontario. 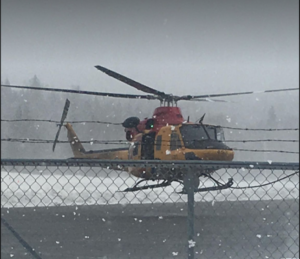 The search continues for an Piper Comanche C-GEWK that was on its way from Elliot Lake to Marathon. The Piper had been purchased, and the owner (pilot) and a friend were on their way back to Alberta with the plane.

The last track seen on FlightRadar showed the aircraft west, southwest of Ranger Lake, April 14th at 9:36 p.m. Since then OPP and JRCC have been coordinating a search that encompasses the area south of Wawa to Marathon. The search has been hampered by poor weather, but when weather permits searching has happened day and night.

JRCC Trenton is requesting that if anyone sighted an aircraft flying along Highway 17 from Wawa south to Sault Ste. Marie on Thursday, April 14th around 6 p.m. to contact the Search Headquarters at 613-966-1178. 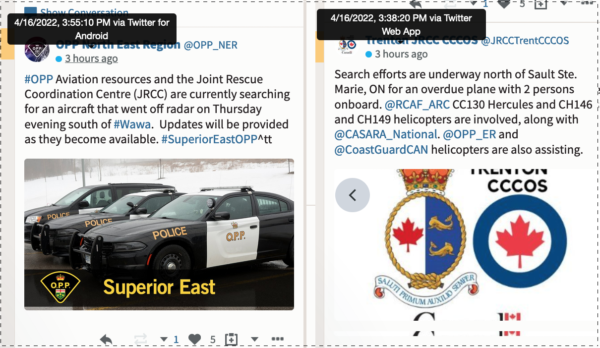 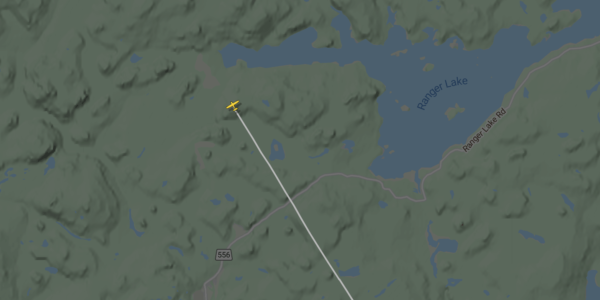 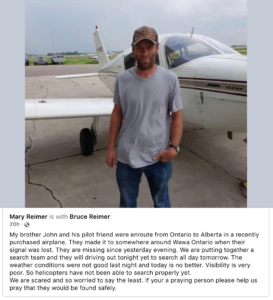 There is increased aircraft traffic in the area searching for an aircraft that may have gone down Thursday, April 14th. Wawa-news called OPP – North Bay at 15:02 and was advised that a media release would be issued. Currently, there is a CH 149 cormorant, a CH 146 Griffin and CC 130 assisting in the search. Posts on Facebook by family say that the plane was just purchased in Southern Ontario, and was headed back home in Alberta when their signal was lost.

Wawa-news is waiting for a media release from the Superior East Detachment regarding the search for an aircraft south of Wawa. A number of residents have said that there was a low-flying aircraft over Wawa late last night during the snowstorm.

Motorists confirm that there have been OPP vehicles at LSPP Red Rock since early this morning. The poor weather in the area has resulted in Hwy 17 (Wawa to White River), and Hwy 101 (Wawa to Chapleau) being closed for several hours earlier today.

There is no other information available at this time.