There was one new wildland fire yesterday, Timmins 4 is 0.1 of a hectare and not under control. There are three other active fires in the Northeast region, all of which are under control.

There was one new fire confirmed in the northwest region by the afternoon of June 15. Thunder Bay 44 is under control at 0.1 hectares.

At the time of this update, there were 27 active fires in the region: three fires (not under control), 11 (being observed), seven fires (held) and six fires are under control.
The wildland fire hazard is mainly moderate with areas of high hazard in all districts except Dryden. There are areas of low hazard in the districts of Fort Frances, Sioux Lookout, Dryden, and Thunder Bay. 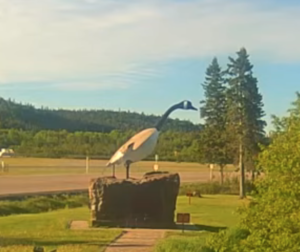 There may be some traffic delays this morning if you are headed to the Soo. Hwy 17 is reduced to one lane near Goulais River area  (Blueberry Hill) due to a disabled vehicle.

The Ontario government is building a new modern Ontario Provincial Police (OPP) detachment in Cambridge to replace the former facility that was destroyed by fire in September 2018.

Vladimir Shatalov, who flew on Soyuz-4 (January 14, 1969), Soyuz-8 and Soyuz-10, died today at the age of 93. “When we look into the sky it seems to us to be endless. We breathe without thinking about it, as is natural… and then you sit aboard a spacecraft, you tear away from Earth, and within ten minutes you have been carried straight through the layer of air, and beyond there is nothing! The ‘boundless’ blue sky, the ocean which gives us breath and protects us from endless black and death, is but an infinitesimally thin film. How dangerous it is to threaten even the smallest part of this gossamer covering, this conserver of life.” – (published in The Little Earth Book, by James Bruges).

Did you know? On June 16, 1884, the first roller coaster in America opened at Coney Island. It had a speed of approximately six miles per hour and cost a nickel to ride.