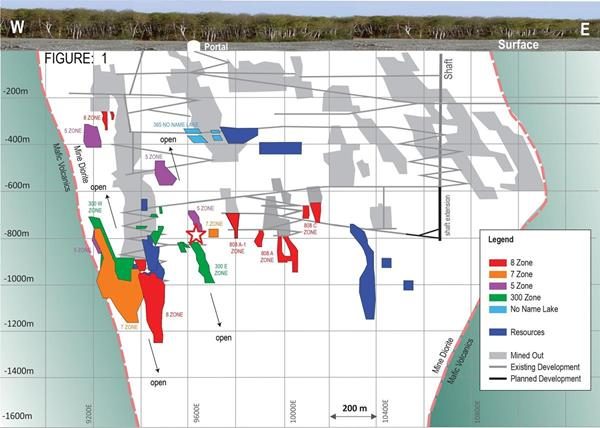 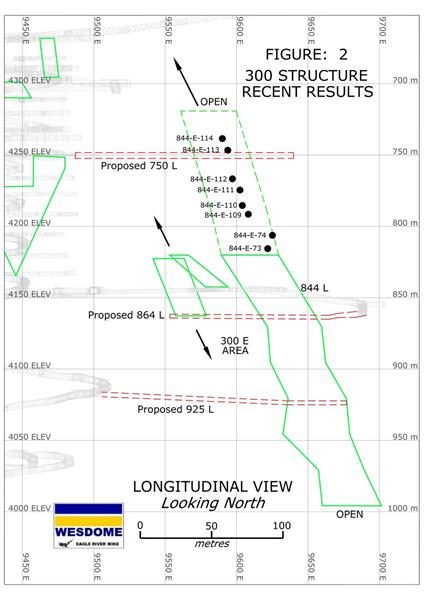 Development on the 844 metre level was completed in May 2017 on the 300E Zone where drifting results have confirmed continuity, strong grades, better widths, and the existence of a new and significant production area for the Eagle River Mine. Continued drilling has now traced the structure from 750 metre depth to 1,000 metre depth, and remains open up and down plunge. 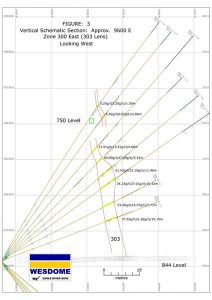 Mr. Duncan Middlemiss, President and CEO commented, “The up-plunge drilling at the 300E Zone continues to return wide and rich intercepts and shows good continuity vertically in excess of 250 metres along plunge. Development on the 864 East metre level is underway with stope production expected at the end of 2017, and we expect to start development on the 750 East metre level in Q1 2018. We remain very excited about this new production area with well above average widths, and will continue to focus exploration efforts on this area next year.”

The 300 Zone is a recently recognized structure located 300-400 metres north of the main 8 Zone structure, which has provided the bulk of the Eagle River Mine’s production over the last twenty years (Figure 1). The 300E area consists of a series of tabular to pipe-like quartz vein systems with strong folding leading to localized widths and grades that are wider as well as higher in grade (303 Lens).

Results are compiled in Table 1 and illustrated on the accompanying schematic cross section and longitudinal section (Figure 2 and 3). Complete assay breakdowns of these holes are appended to assess grade distribution and internal continuity.