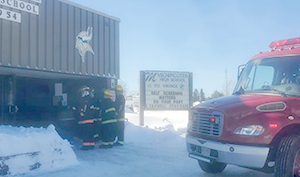 The Wawa Fire Department was called to Michipicoten High School this afternoon for a small fire. Some students stood across the street in Queen’s Park, and others waited in the Auditorium. Some students reported smelling smoke, and others reported black coloured smoke as they went outside.

From the Algoma District School Board, “This afternoon there was a fire in a student washroom at Michipicoten High School.  The fire department was called to the school and the fire was quickly extinguished however there was smoke in parts of the building.  Students were removed from the impacted part of the school to either an alternate site across the street or to the auditorium which was clear of smoke.

ADSB staff and a contractor will be at the school over the weekend for cleaning and to clear the air.

Our current plan is for students and staff to return to the school on Monday, February 28.”