The name of the deceased has not been released pending next of kin notification.

Highway 102 was closed for several hours but reopened early this morning (December 13) to traffic. 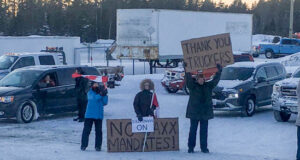