Rainfall continues to swell creeks and rivers in the Algoma District 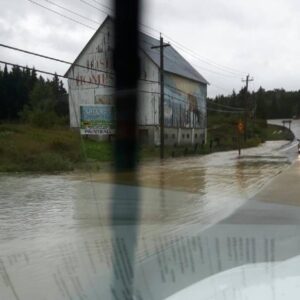 Reader supplied photo showing the water filling the ditches and flowing across the highway at Joseph’s Homestead.

Over the past several weeks or so, there have been many rainy days. The rainfall of September 10 caused flooding and significant damage in the Goulais River area. Most notable for travellers was the damage at Joseph’s Homestead (Post Office RD-Vankoughnet TWP, N). For a while, two lanes and the shoulder were blocked due to flooding; and at the Goulais River Bridge Highway. The shoulder and part of the southbound lane had washed out.

On September 15th repairs were underway at Anderson Road. Both the east and west sides of the highway had been damaged. Dump trucks heavily laden with fill were bringing them and filling the damaged areas. At Goulais River, the traffic cones were out, but repairs appeared to be concentrated at Anderson Road where damage was more extensive and severe.

This is the lineup waiting for the dump truck to finish as they continue to repair the damage on the east side of Highway 17. 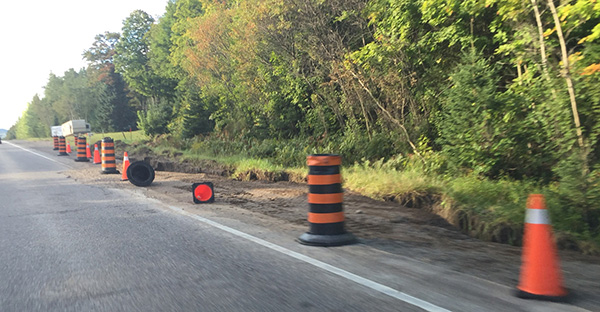 Just south of the Goulais River Bridge, It is easy to see the damage to the ditch and shoulder. 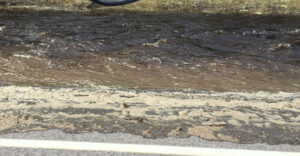 If you look closely at this image you can see that the water was as high as the highway at one point and almost to the white line.

Yesterday on Highway 101 near (Mile Marker 48, Stranded Lake) a beaver dam let go and has caused some ditch and shoulder damage. Traffic cones have been put out marking the area, and crews will be repairing the damage today.

As a result of all the rain over the past few weeks in the district, the ground is saturated with water. In Wawa, there was a brief but intense rainfall for about 1/2 hour early this afternoon. There is a 40% chance of rain showers this afternoon.