…and that day just happens to be 2day 🤣. Of course, it is the other way around, but how else could I insert my witty Seinfeld meme.

Anyway, according to Joey, as I inquired if he was on a personal relationship with Bryan, he responded no, not all… he actually reached out to me on Instagram and said ‘Hey, I like your stuff’, and obviously I was pretty floored, and then I also read the interview you did with Rik Emmett and again I was floored.

If any of you… my faithful readers, have done any research on Joey since my last couple of articles mentioning him, you will know that he is based out of Winnipeg, Manitoba, and is a funky blues style singer and incredible guitar talent. Joey is also known for his work in The Bros. Landreth with his brother Dave. These are the Dave’s I know I know, these are the Dave’s I know. ( Kids/Hall)

TBL had early success and made quite a name for themselves earning many awards including a JUNO for their 2015 debut album re-release of Let It Lie. Not only has the prestigious Rolling Stone magazine praised the boys, but after catching their set, the legendary Bonnie Raitt is quoted as saying “I haven’t liked a band as much as The Bros. Landreth in a long time. To hear this kind of funky, southern style rock played with such originality and soul will knock you out.”

Back to Joeys’ solo career; when I did my research I really liked what I heard on his most recent album Hindsight; a couple of tracks that stood out were Cryin’ and Still Driving. Great melodies and songwriting on the whole album… BUT… my very first Google search on Joey leads me to the song below and I was sold right away. This tune, Two Trains was originally recorded by Little Feat and damn… Joey puts his own spin on it, but doesn’t take away from the classic. I did not realize he was such a good singer as well. I even asked him which Baptist Church he sang at; to which he just laughed.

Now that you have listened to this rising star, let’s get to know him a little bit better. His guitar style is quite complex as he utilizes natural vibrato, fingerpicking, slide guitar, and some high end bending. I asked him whether I was an influence… to which he laughed again. 🤣.

Among my guitar influences growing up, I would have to say Stevie Ray Vaughan was my first guitar hero and influence; although I don’t think I have managed to keep much of his sound in my playing… his playing is on a different level for sure.

In terms of slide players, Bonnie Raitt and Ry Cooder were big influences and helped develop my style, and then I got into what is called Sacred Steel playing which is a kind of a gospel tradition-oriented towards vocal phrasing and you can hear it in the likes of Derek Trucks, he’s great. A friend of mine one day said, well if you like Derek, check out Aubrey Gents. I think he is based out of Florida. I could be wrong, but he’s really good, and of course, from that era Chuck Campbell is another one.

Here in Winnipeg, there is a really great guitar player around my Dad’s age named Brent Parkin, and although he wasn’t a major influence, he did direct my curiosity to things like….how does he do this or do that? I mean there are just too many to mention.

Guitar and singing are the staples of Joey’s musical talents and he said he has been singing since he was a young kid. His first instrument to learn of a hardware nature was actually the piano.

I took piano lessons until I was about 8, my parents had separated when I was about 5, and so (how I started playing guitar) one day my Dad said, hey do you want to take guitar lessons with me?vKind of a way to squeeze in an extra day (laughter), and I did that with him and fell in love with the guitar right away. I do regret giving up on piano though.

Watching the video above, you will notice that Joey enjoys playing with his knob a lot 🤣…but seriously… his hands are always moving between the time he is picking or fingerpicking his strings to either the volume or tone/treble knobs and even the machine heads. I asked him if it was a matter of keeping beat or if he was actually adjusting that much and that fine.

Yea, I am constantly tweaking the controls. I mean I am also a total gear nut. I have a massive door size pedalboard, I think people underestimate the power of your volume and tone controls and how a subtle tweak can change the way the guitar responds, and it’s not always audible either. But it is something you can feel as to how the guitar responds to the amplifier. I am also constantly adjusting the tuning of the guitar as I play pretty heavily and I can very easily knock the strings out of tune.

When asked about whether he has played the Soo before; it was affirmative. He believes it was around 2014 and the venue may have been Lop Lops.

In respect to planning a Canadian tour once C19 has dissolved, oh yes, absolutely, we’re chomping at the bit to get back on the road. I have my solo project and also with TBL with my older brother Dave, we are currently writing for a new record, so yes we are going to tour as soon as we can. When we are heading out East, we’ll definitely stop in the Soo!

I had to ask Joey if people often mistake him for Eric the Red or other famous Nordic Vikings.

(laughter), yes, I did get that a lot, and also the guy from Sons of Anarchy. I recently shaved my beard though, so obviously I don’t get those references anymore.

**It’s been really refreshing as of late where I have gone off of the hard rock highway per se, and have listened to some really good music in other categories… Last week I did an interview and piece on The Dodies, a young duo based out of Israel, and you can find that at Boston Rock Radio, and this week I spoke with one hell of a talent and nice guy in Joey Landreth.

Coming up this Thursday, I will have my article and interview for you here at Wawa News on… the one …the only …Harry Shearer.

The Simpsons would not be the success it has been without this guy as he is one of the main writers and voices at least a half a dozen of the characters.

Thanks 4 reading and we’ll C Ya Thursday ! 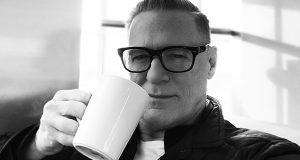