“… and behold, a black horse; and he who sat on it had a pair of scales in his hand.” 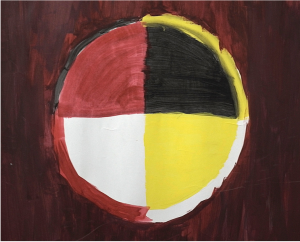 Night is falling. Despondent, surrounded by a gathering dark, we make no move towards the Black Rider who approaches from the southern door of the medicine wheel. But we hear his horse grow louder, and we hear a voice saying “a loaf of bread will cost you a whole day’s pay.”

Unable to see in the low light, we are motionless between the extremities of globalism and nationalism; like an arrow on a slackened bow string. But this stillness, for the moment, is exactly what we need. We haven’t yet understood the severity of our situation, hiding instead in the frenzied, mindless movements of our daily routines. In our stillness reflection is possible.

The first two movements of our apocalypse have left us aimless and weary of each other. What is nihilism, but the loss of our system of values, and with it our sense of meaning and purpose? The earth has withdrawn farther from us and there appears to be no way to get there. The truth is, we’re not even sure that we want to be there.

“God is dead. God remains dead, and we have killed him,”wrote Nietzsche infamously. But as he knew, this was not entirely true. When he wrote this in the 1800s, we had only killed the living God that had once dwelled in our hearts. However, Oneness and Truth, those unifying concepts remained. They are the hidden keystones supporting various systems of belief, including the most atheistic. From common sense, to scientism, from fascism to Marxism and most environmentalisms, —where God has been replaced with ‘Nature’—all have relied on this structural guarantee of meaning. This virtual, objective perspective keeps everything ordered and in its place; separating good from evil and justifying our behaviour.

But now, our apocalypse has finally done the deed, and left us unsure of everything. Each people cynically proclaims its own truths while hiding from each other the obscene side of their culture. Except us; we’ve been exposed as hypocrites in the light of our own values. Preaching a hatred for slavery, we look away as children are paid pennies to manufacture our products. Preaching a love of peace we are complicit in the invasion and bombing of countless lands. Preaching environmental consciousness we export our pollution and greenwash at home. After decades of preaching tolerance, our own pretence to tolerance begins to fade.

Stripped of both the living God, and the structural God, we are left without objective reasons, and are unable to defend anything about our culture or history. The nihilism that Nietzsche predicted would overwhelm us has arrived.

The clip clop of hooves gets nearer. There is a sudden pang in our stomachs; hunger.

Few of us have been able to follow Nietzsche’s direction to live a life beyond good and evil, creating our own values; even Nietzsche himself never made it. It turned out he was also all too human. He too hungered for love, and compassion. He too came to remember humility through his hunger.

Representing the Global South and those with the darkest skins, the Black Rider reminds us of the hunger of others —no justice no peace, comes the sound of voices over hip hop beats —as well as our own. It is hunger, not only of the flesh, but of the heart and of the mind that the Black Rider, holding his scales of justice, brings to show us. Like a planet —like the earth itself —it pulls us towards him with an irresistible gravity.

Oh, what a horrible feeling! What an insane feeling! In this desert of the heart, our skin is as hot as an oven, and we are feverish from hunger.

Wracked with pangs, all thoughts of morality disappear from our minds. We need to eat, we need to worry only about our own survival, and not what that means for any one else. We cannot stay in this desert! We look at the weak, the naive, and the tired, and lick our lips. It all looks good.

Teeth bared, ready to feast, a thought creeps in and makes us stop. The voices that have condemned us, have done so by appeal to our own law and our own values. What does this mean?

The Black Rider is in some sense an affirmation of the Global North. It is in the spirit of our professed values —emerging from a hatred of slavery, of terror and of murder —that our vision of the globe was put on trial; what is judged is not us, but our failed effort.

The first movement of our apocalypse showed us that our effort to unite the globe under universal values was premature, and undermined by our hypocrisy. The second movement revealed the true difficulty of conviction; that having been called out on our hypocrisy we could not simply return to the shelter of old castles or lands.

As is unavoidable, we asserted values without fully understanding them or ourselves. Yes we are hypocrites, but that is neither unique to us nor a justification to carry on as we have. Our apocalypse demands that we approach again those values we professed with a new understanding of them, seeing them not as dead letters, but as living in our practices.

For, if in our fear of being terrorized, enslaved or murdered by those of another colour or creed we put brutes of our own colour or creed in charge over us, what will we have won? It will appear that we’ve gained our security, but we will have lost our souls. In the name of defending ourselves, we will have abandoned ourselves.

Still, we know that difficulties remain. There are real differences between us. Humans are not numbers in a math equation that are equal in the sense of substitutable. 2+2 of us are not equal to any 4 others. We aren’t equal in all of our capacities. We are not even equal in all of our potentials. I could have practiced everyday since I was a kid and I would never have been able to swim as fast as Michael Phelps. I could be two-spirited, but even if I change my body through reconstructive surgery, I cannot get pregnant. Humans are not simply ideas.

We used to view equality in terms of our equality before God, or the law. But we know that not everyone is equal before the law, even if we should be; a better lawyer, for one, makes for better results. And if God is now dead, then in what sense are we equal? What is it that the Black Horseman weighs on his scales?

Yes, the critical zone does change; that is what the ecological crises now unfolding teach us. Even the climate deniers agree when they say,“the climate is always changing.”The question is whether we will face the changes with humility and courage, remembering our hatred for slavery, terror and murder; or whether we will cling to one historical structure, a frozen image of “folk”forever inflicting on each other the same wounds and sacrificing the same animals at the same altars. Yes, things do change in the critical zone. Are we willing to change too?

The third movement of our apocalypse brings a new awareness of the tensions that are holding us: between what is fixed and what is changeable; between being hard enough to eat and being soft enough to care; between having the conviction to exist, and the humility to be careful in our judgments; between our desire to both eat, and to remain hungry. These tensions tighten the bowstring on which we rest, like an arrow being drawn back.

A pale crescent moon has risen and hangs in the sky, aimed at the East. “The bow bends; the wood complains.”

A silhouette moves on the horizon.