Canadian Weapon of Mass Destruction Against the MSM

First off, I’d like to wish you a Safe and Healthy 2020. Living in the West and our general safety is something we take for granted at times. Below you will read that it’s not that way for many around the world. Hopefully we can challenge the narrative given by the MSM (Mainstream Media) and get the truth out. 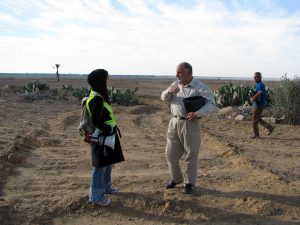 As per my intro article regarding world politics that I did a few days ago ; this is the first of three parts regarding my interview with Canadian Investigative Journalist & Rights Activist Eva Kareen Bartlett.

Eva’s resume and portfolio itself could be a whole article, but I will give you a brief summary and you can investigate more (if you’d like) as Eva investigates and confirms the facts for herself before she reports.

Ms. Bartlett is an independent writer and rights activist with extensive experience in Syria and in the Gaza Strip, where she lived for three years (from late 2008 to early 2013). She documented the 2008/9 and 2012 Israeli war crimes and attacks on Gaza while riding in ambulances and reporting from hospitals. In 2017, she was short-listed for the prestigous Martha Gellhorn Prize for Journalism. The Award was rightly given to the amazing journalist, the late Robert Parry {Consortium News}. In March 2017, she was awarded the “International Journalism Award for International Reporting” granted by the Mexican Journalists’ Press Club which was founded in 1951. Co-recipients included John Pilger and political analyst Thierry Meyssan. She was the first recipient of the Serena Shim Award, an honour that has been shared by many world reknowned and excellent journalists such as Vanessa Beeley and Julian Assange. Eva fights and reports for the oppressed, whether it’s a journalist wrongly detained and imprisoned in the Ukraine, or for the people that are fighting for survival in Syria ; a country she has visited no less than 13 times over the course of the illegal war. 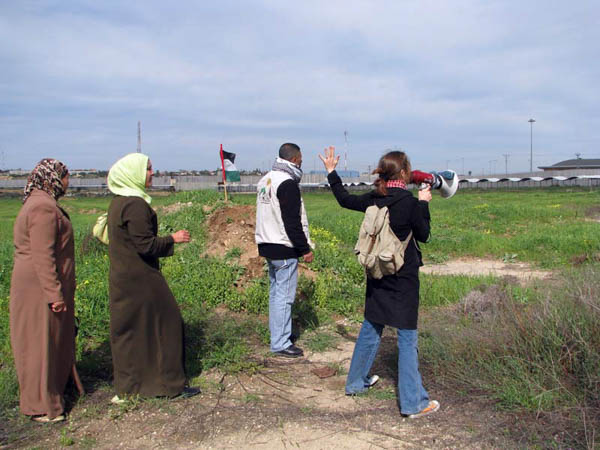 Gaza 2009, accompanying unarmed Palestinian protesters who were protesting the brutal Israeli siege on Gaza. Usually in such protests, we were met by live ammunition fired by Israeli soldiers. 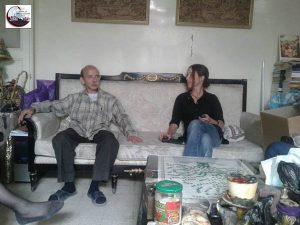 Syria, 2014,  just after the old city of Homs was restored to peace. Taking testimonies of civilians subject to terrorist rule for years.

1) When in your life Eva, did you decide to go against the grain and investigate and report from your own findings by going to war zones, interviewing those involved directly in the wars, and publish your findings, knowing that you will be ridiculed and censored?

“After going to Palestine and seeing unspeakable Israeli brutality and cruelty against Palestinians. In 2007, I spent eight months in occupied Palestine, where I saw Israeli army invasions, Israeli soldiers attacking villagers with tear gas and firing live ammunition at homes. I took testimonies of Palestinian civilians who had been held hostage or had their homes destroyed by the Israeli army during such invasions.

I was with farmers who came under attack by illegal colonists; I was many times blasted with the tear gas the Israeli army fires at unarmed Palestinian protesters, was kicked in the head by an Israeli soldier, and daily saw the dehumanizing way that Israeli soldiers and colonists treat Palestinians.

The combination of these and many other experiences (detailed here) and the kindness I met by the very Palestinians being terrorized made it impossible for me to resume a normal life. In November 2008, I went by boat to Gaza, and bore witness to yet more Israeli crimes, including war crimes like using White Phosphorous on civilians during the Israeli war on Gaza in 2008/9, Israeli snipers targeting medics and Israeli soldiers killing a medic and civilians at his funeral the following day with flechette bombs (dart bombs), firing live ammunition on unarmed protesters, including youths, firing live ammunition on farmers working their land, including elderly and youths. All this and more I detailed in this article.

Since first going to occupied Palestine, I began writing and sharing what I was seeing. Eventually my blogging efforts panned out into writing without pay for various publications, and finally writing as a journalist for Inter Press Services, RT (formerly Russia Today) and later Mint Press News.

I used to believe that getting people to listen about the Israeli crimes against Palestinians was perhaps the hardest endeavour I would face. Then the war on Syria began, and I realized that the war propaganda around Syria was far deeper and more sinister than one could have imagined.

For more information on what I’ve outlined, see here.

As for media attacks and smears, they have been many, and they share the common feature of being character attacks rather than addressing content of my reporting. On the other hand, countless times I’ve had Syrians in Syria and elsewhere thank me for telling their truths. That is more meaningful to me than whether a corporate owned publication approves of my writing or not.” 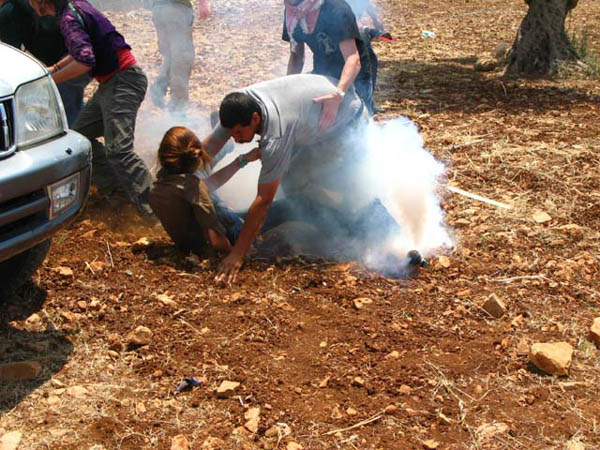 Bil’in, West Bank, 2007. After locking onto a Bil’in villager to prevent the Israeli army from abducting him, we all fell in a pile. An Israeli soldier kicked me in the head and finally threw a tear gas canister at us. 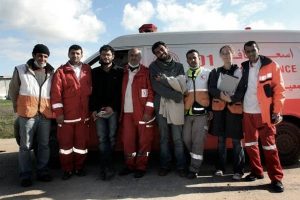 Gaza, January 2009, volunteering with Palestinian medics during the Israeli war on Gaza.

2) You have been to Syria on 13 occasions; what is the most important piece of information that the Western readers should know about the war ?

“What occurred in Syria was not some spontaneous, organic, peaceful uprising as was insisted by corporate media. To the contrary. In a 2015 article, I detailed some of the major fallacies with that false rhetoric, particularly violence from protesters from the very start, including numerous massacres.

Contrary to media reporting, the president of Syria is actually widely-respected by Syrians, excluding the minority of Syrians who chose, for financial, extremist, or power reasons, to join the terrorist groups. I’ll refer to a post I wrote at the start of 2019, which collates numerous articles I’ve written over the years, giving countless examples of this support. But even just logically, does it make sense that after over eight years of Syria being warred upon from the most powerful nations on earth President Assad would remain in power if he did not have a very strong support base?

Further, the Syrian army, which media has relentlessly vilified over the years, are not “Assad’s forces”, they are a national army, made of conscripts, career soldiers and volunteers—defending their land against a very clearly foreign invasion.

Finally, keep in mind that every time after an area was liberated of al-Qaeda and co-terrorists in Syria, the corporate media accusations about Russia or Syria starving civilians were shown to be false. Instead of the Syrian government starving civilians, in every case it turns out to be terrorists in control of food and aid.

Terrorists occupied hospitals and used their basements as prisons for their Sharia courts, as was the case with the Eye Hospital complex in eastern Aleppo. Terrorists stockpiled and hoarded food and medical supplies, which even Reuters reported in December 2016 after Aleppo was liberated, and which I found in Madaya and later in eastern Ghouta, once those areas were restored to peace.

After the last accusation of a chemical attack, in Douma, eastern Ghouta, as with a number of independent journalists, I went to Douma and spoke with medical staff and civilians who told me there had not been a chemical attack. Even journalists like Robert Fisk and Peter Hitchins—both of whom are very outspoken about their disapproval of the Syrian government, to put it mildly—have written articles from or on Douma that contradict the official narrative (that the Syrian government used a chemical agent against civilians in Douma).

More recently, multiple whistleblowers from the OPCW have spoken out against the accusations. The people who support the allegations are the corporate owned media, Western funded NGOs and platforms, Western governments who have been working to overthrow the Syrian government, and the terrorists themselves.

Finally, tying all of these points together, it is important to be aware of the propaganda ring comprising corporate media, parties interested in overthrowing the Syrian government and particularly a number of Western-backed human rights groups or NGOs directly affiliated with or funded by Western governments. These different groups and bodies work hand in hand to churn out echo chamber war propaganda, to prepare a Western public for another no-fly-zone and “humanitarian” intervention, as per Libya and Iraq. Many of these organizations also attempt to discredit voices critical of Western media coverage on Syria.” 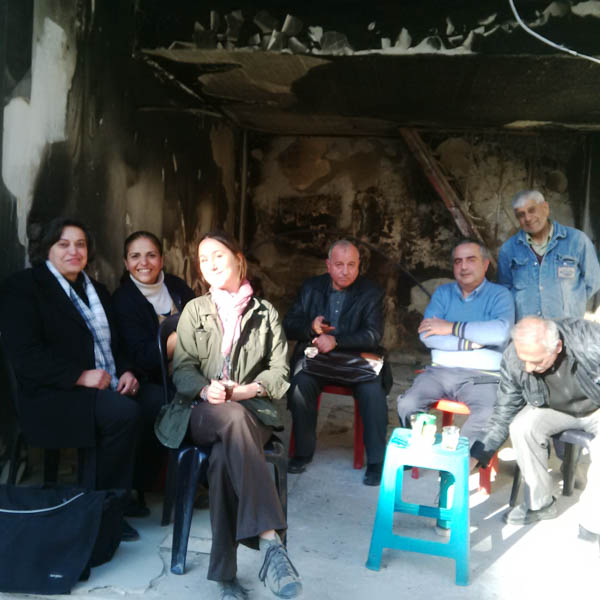 Homs, Syria, December 2015: A year and a half after the old city was cleared of terrorist groups, Homs’ Christians were able to finally celebrate Christmas again, and reopen businesses. 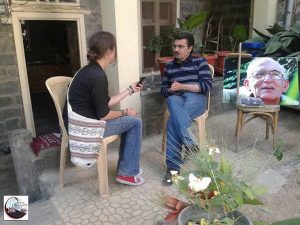 Homs, Syria, 2014, just after the old city of Homs was restored to peace. Taking testimonies of civilians subject to terrorist rule for years.

3) Have you ever feared for your well being because you challenge directly the American and UK narrative about the war in Syria ? You have been quoted as saying ” Everything you have heard about Syria is a lie”.

“Actually, that quote is not the full quote of what I said during an interview. I said: ‘As soon as I went to Syria, from day one I started hearing from Syrians that everything that the media had been saying about their country, about a popular uprising of nonviolent protesters, about their government cracking down on them…that all these things were lies.’

So you can see I gave examples of lies, and not simply every single thing anyone has heard about Syria. Context is important.

On my first visit to Syria in 2014, I interviewed an American and a Syrian American living in Latakia. They gave example after example of how reality on the ground was opposite to what corporate media had been reporting, including listing a number of atrocities and massacres committed by those who western media were calling unarmed protesters. This can be watched in part 1 and part 2 of our conversation.

Corporate media have indeed told many lies on Syria and is guilty of atrocious war propaganda, and indeed that many in the corporate media have the blood of innocent Syrians on their hands due to their role in purveying the terrorists’ narrative and ignoring the narratives and realities of civilians being targeted by terrorists. To quote the father of the famous boy in the ambulance (Omran Daqneesh), he told me the media are trading in Syrians’ blood.

I do what I do, whether regarding Syria, or Palestine, Venezuela or elsewhere, because I believe in it and because I can offer a platform to voices otherwise ostracized by corporate media”.

**Part Two coming up next week, thanks for reading**