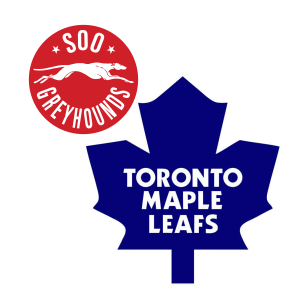 Well, to be clear, seven members of the Toronto Maple Leafs organization have dog blood in them. Soo Greyhounds dog blood is what I am referring to.

I stopped watching and cheering for my childhood NHL favourite Montreal Canadians many many years ago. In fact, I stopped watching NHL hockey for that matter as well. To me, it was getting irritating, watching some of these guys hold out for millions of dollars and leaving a team for an extra million or two.

Can you blame them ? I don’t know, but when you are making $8 million to play a game you enjoy, and decide that you need $10 Million per season and won’t play until you get your way, it turned me off of professional hockey and all professional sports for the most part.

I do take into consideration that it’s a business, but I’m entitled to my opinion, and I’m entitled to change it from time to time. For sentimental reasons that has recently happened.

As many may know I write columns about the Soo Greyhounds, our local junior team and I am passionate about it. These kids are young, not financially spoiled (yet) and play with passion each night.

There is also a tight Soo connection in the fact that current coach Sheldon Keefe, brought this team to serious respectablity when in 2012 he replaced coach Mike Stapleton to right the ship of an organization that had been sinking for quite a few years.

Coach Keefe, after his tenure with the Hounds was hired by the Marlies and in 2017 won the Calder Cup after a dymanic season that produced 54 wins. 54 is a lucky number of sorts for Sheldon, as this is the same number of wins that he produced with the Hounds in 2014 which is the most in the Greyhounds franchise history. If my math is correct, Sheldon has led the Leafs to a 9-4 record since his arrival. Not too Shabby, as I write from the Shabby Motley coffee shop in the Soo.

Moving on to another former Greyhound; Jake Muzzin is a former Soo Greyhound and was the winner of the Max Kaminsky Trophy for being the OHL defenseman of the year in 2009. Muzzin went on to sign as a free agent with the Los Angeles Kings and in 2014 hoisted the Stanely Cup. Muzzin is currently on the Toronto Maple Leafs blueline and reunited with the Soo connection of Dubas and Keefe.

Staying on the blueline,  we have Rasmus the “Sandman” Sandin, who played for the Hounds a couple years ago, and will be up in the Big Smoke permanently next year in my opinion. Rasmus was on Kyle’s radar for quite sometime and the prodigy/prophet hasn’t let us (Hound/Leaf fans) down since he was drafted.

Currently the Sandman is playing with the Marlies, but has a bright future with the Leafs and a Stanley Cup run hopefully in the next year or two. Be sure to cheer him on when the Swedes play any other team than Team Canada at the World Juniors this year in the Czech Republic.

Now Mac Hallowell, a former Hound defenseman who was known for his offensive abilities and speed is also only a couple phone calls away from being under the lights at the Rogers Center. Mac currently is playing for the Newfoundland Growlers of the ECHL. The Growlers are part of the Maple Leafs organization and wouldn’t it be nice to see him in a Maple Leaf jersey with the above.

Tyler Gaudette also played for the Soo Greyhounds from 2012-14. He came to the Greyhounds via a request from Head Coach Sheldon Keefe. Keefe had previously coached him with the Pembroke Lumber Kings. Tyler is currently a centre for the Toronto Marlies.

Last but not least, the Soo Greyhounds and Leafs organization connection concludes with Marlies Assistant Coach A.J. MacLean who shared the Greyhound bench from 2013-2015 with Sheldon Keefe.

When Garden River native and  former Soo Greyhound and Buffalo Sabres coach Ted Nolan coached, he always had his trusted hired gun at his side in Danny Flynn. Who knows, the relationship Sheldon has with A.J. might land the Marlies Assistant coach behind the bench with the Leafs at some point. With hockey, chemistry is everything, and wherever Sheldon is winning, A.J. is only a few feet away.

So there you have it folks; whether you love the Leafs or hate them, if you are from the Soo and area, you should be proud of the fact that our organization has produced some fine products to be proud of.

Who knows, in the next couple of years we may see Lord Stanley being paraded down Queen Street and held high by the six mentioned above. 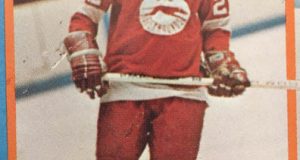 Former Greyhound Has Fond Memories of the Soo