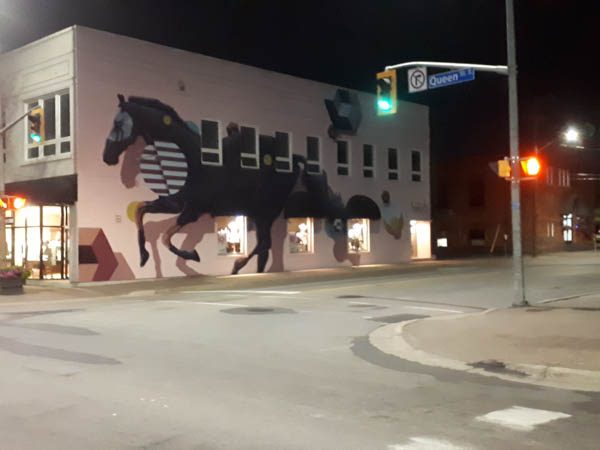 Yes, for many years, the city has been talking about the downtown core dying, but that seems to have slowly started to change and I believe it has not only come out of it’s recession, but is going to grow and become as vibrant as it ever was. There are many reasons for this and I will get into them in a scrambled fashion as if you know me, I’m kind of a scatterbrain.
As I like to call our elected officials on things I disagree with (removing the Norgoma, locating the Splashpad at Bellevue and not Clergue Park, Tommy the Choo Choo Fence etc,), I believe it is also my responsibility to commend them when they do things to improve our city and quality of life. Their Noront (ferrochrome smelter) swing was certainly a home run but we’ll talk about that another time. 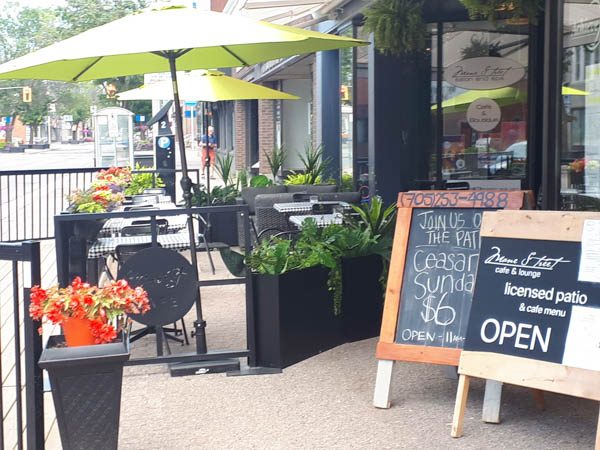 Right now, let’s focus on the improvements that are bringing Queens St back to life. The cities’ decision to relax its patio by-laws on the sidewalks was a great start. It brings people out into the fresh air to people watch and enjoy the atmosphere and ambience.  Crowded businesses with little floor space now have access to more customers and where there are customers there is a profit if the businesses are run properly. I’ve seen a few patios and the Mane Street Salon and Spa is a perfect example of this. It seems to be always busy and the city and the salon’s owner should be given a round of applause.
A dear friend of mine and for the sake of anonymity, let’s just call her Amanda, who is visiting her folks this summer commented recently that ” it isn’t depressing to walk downtown anymore, there is more life and energy” than when she lived in the Sault full time 20 years ago. That speaks volumes as she lives in the GTA and we know there definitely is energy and life in the Big Smokes’ downtown core. 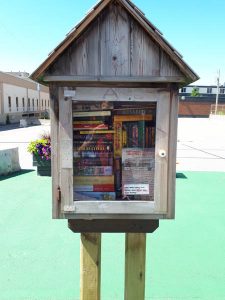 I also have to give kudos to the Downtown Association as well for the forward-thinking and improvements. I have not confirmed this, but I believe they are fully are partly responsible for the additions of the pianos, book exchange boxes and the beautiful murals that have been painted on the sides of exisiting businesses downtown. This is exactly what we need……….energy and style as we are locaed in a position to be a major tourist area and need to showcase ourselves properly.
I still think the city and DT Association should consider heavily painting the Memorial Tower as that would be like going from a black and white to a colour TV. The mural and colours could be seen from the International bridge for tourists coming to town, or going  through town to vacation in Wawa or any place up North where they enjoy our Northern beauty.
Keeping on the murals, I suggest the city and Police Services look into increasing the fines and or jail time for graffiti and vandalism; I hope it doesn’t happen, but some punk out there might think it’s funny to “tag” one of those murals. They double the fines for speeding in a construction zone when workers are present, so why can’t (because it affects our view as a tourist city) they do the same for this. Just my opinion.
Although, I have complained about the $100,000 to “rebrand” the city with a new logo and will not ever be convinced it was a good idea, I still will admit the city and it’s officials are starting to do a better job with our downtown and I truly believe it will be as strong as ever because of another reason.
The greed, in my opinion of the owners of the property where the Station Mall (Algoma Central Corp.)is, is disgusting; I have heard rumours from good sources that basically infer they are trying to the run the mall dry by not allowing reasonable rent. The property was on the market a few years ago and when the anchor at Sears was chopped off, they knew it wasn’t going to sell as a viable property as a commercial operation. Now that WalMart has left for whatever reason, it’s only a matter of time before all the stores close one by one by one. A plane can’t fly without wings.
With online shopping, big box outlets and cheaper rent elsewhere (Queen St ), the mall will close and thus the property will be bought by a developer who will demolish it and build something central and waterfront. Maybe this is where the Garforth style attraction will be built………….maybe it will be hotels, condos, and apartments. Who knows but I feel within my lifetime because of the Station Mall and its impending death, we will see a resurgence on Queen St and the downtown core. ; it has already started and I’ve listed the reasons above.
Things started to change about two years ago when the Downtown Association held town halls and asked for ideas from us citizens. Last year, we saw an injection of more street parties where they worked with the city and mayor to allow for road closures for these parties. This was a great idea and we are seeing the fruits overflowing of out the basket.
I walked through Rotaryfest Friday night with this “Amanda”  chick and people were laughing, walking their dogs, pushing baby strollers, walking with their children, and there was a fresh scent of energy………. along with the rib sauce.
We continued our journey in the downtown core and walked our beautiful John Roswell Hub Trail. We both commented on how nice the trail was along the St Mary’s and how we both missed Jet Set, Johnny!
With the ferrochrome plant coming to fruition, and the new blood and forward thinking, Sault Ste. Marie is making a name for itself and climbing out of the abyss. 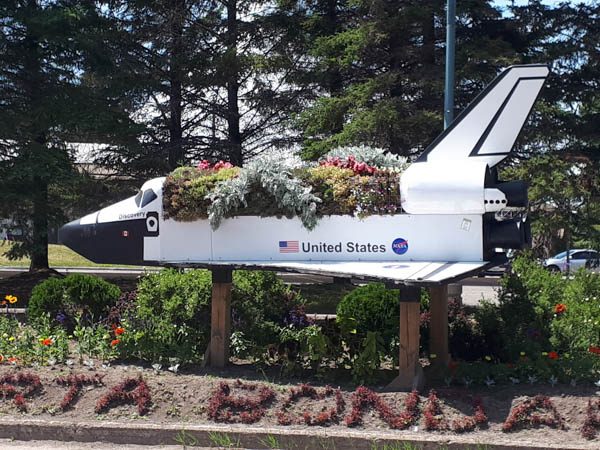 ** After writing this piece at my favourite and the world famous Shabby Motley Coffee shop, I walked to the hub trail and behind the OLG on Foster drive noticed a nice replica of the Space Shuttle adorning the United States of America logo on it ; nothing wrong with that, but I think it would have been wise to put up a plaque explaining directly to the tourist the significance of the piece. The bust of Dr Roberta Bondar is indeed a couple hundred of feet away but could be easily missed. Just a thought .**
From Queen St Down to the river ………………………..things are looking Up.